Our MVP night - a Reunion affair 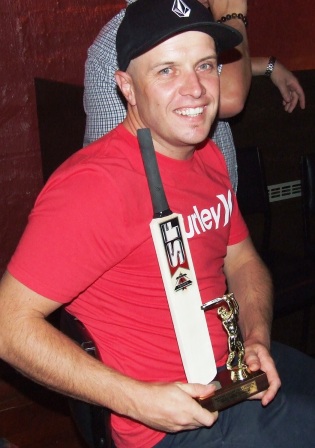 Our MVP night - a Reunion affair

Moonee Valley Cricket Club held its Most Valuable Player night at the Reunion Bar in Union Rd, Ascot Vale on Sunday, March 10, and a good night was had by all.
We did the vote count for our MVP awards and also announced the winners of the Fieldlow awards.
The MVP medals were presented to the winners, while the Fieldlow best fielder awards will be part of the proceedings at our Presentation Night on Saturday, April 20.
Host Matt Clare of the Reunion Bar is a Moonee Valley cricketer and a sponsor of the Club, and did us proud with a night of presentations, music and a late licence which enabled us to celebrate well into the early hours.
It was also a chance for us to unwind after coming up short earlier in the day in our two senior semi finals - the Fourths and the Sevenths.
The MVP night also saw the presentation of key milestone awards - players reaching

games, wickets and runs milestones, and those celebrating key achievements such as centuries and five-wicket hauls. Thanks to Matt for hosting such an excellent night.


Top right: Heath Webb-Johnson with his century trophy for his great ton in the Seconds.
Left: After the match: L-R: Sevenths Semi Finallists Peter Whebell and Phill King with Victoria Thorneycroft and Peter Golding.