Our Most Valuable Player and Fieldlow results

Our Most Valuable Player and Fieldlow results

The Valley seniors held our MVP and fielding award vote counts at the Moonee Valley Bowls Club on March 10, and the call of the card brought plenty of excitement with each vote.
The count was hosted by Jonty Rhodes giving a brief account of every round of every game, while Peter Golding showed his skill with computers by adding the votes instantly to the big screen, along with the leader board after every round.
While it was the senior presentation night, some of our younger players who played a lot of senior cricket got into the action.
Junior Joshua Norsetter was prominent among them, winning the fielding awards for both the Thirds and Fourths, as well as the Fourths MVP. 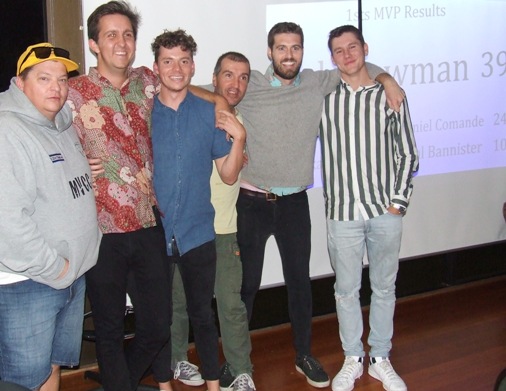 Thanks to Frosty Simmons and the bowls club for hosting the night, and to our sponsors Florentine's for the hearty meal.
***For the full votes in each grade, click HERE