Congratulations to our young guns 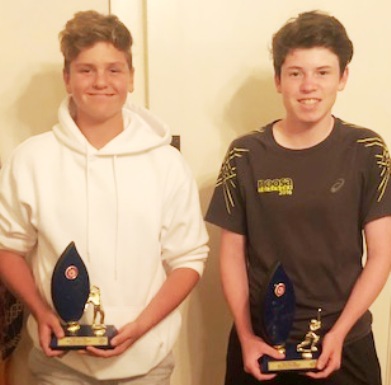 Congratulations to our young guns

Two of Moonee Valley's young guns won all-of-comp awards at the North West Metropolitan Cricket Association presentation night.
Harry Pickering collected the runner-up award in the Under 14 (1) bowling, while Noah Wallwork collected the Under 16 batting award.
Both Harry and Noah played senior cricket with us during the 2018/19 season - Harry making his debut, while Noah had previously played turf with the Valley.
The Under 14s missed out on the finals when tipped out by the last ball of the day in the last match of the season.
The Under 16s played the Grand Final at home at Ormond Park on two consecutive Friday evenings, but fell short in the run chase by 17 runs.
We had a formidable batting line-up in the Under 16s, with the top four bats - Noah Wallwork, Bevan Holder, Krish Kanchan and Luca Nimorakiotakis - all averaging more than 50 across the season.
Junior Co-ordinator Peter Pickering is already working and planning for next season, and sees a bright future for our junior program and the pathway into senior cricket.
Well done to our young men!
Above: Our junior comp award winners: Harry Pickering (left) with the Under 14 (1) runner-up bowling award, and Noah Wallwork with his Under 16 batting award.