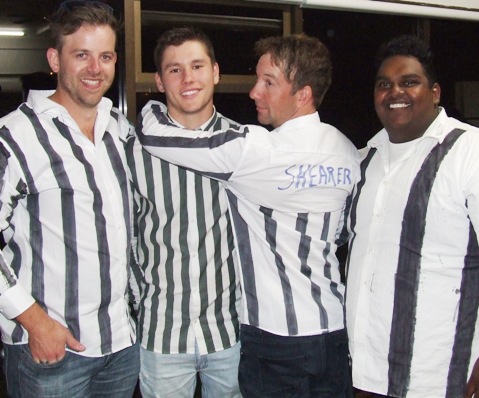 Three out of four players in this picture are wearing these shirts to win a bad-taste bet. Can you guess the odd man out?

Moonee Valley's First Eleven held their Mad Monday wind-up at the Seconds Semi Final on March 10, and cheered on our guys as they tried to get across the line.
In honor of their skipper Jack Newman, they wore replicas of his favored black-and-white striped shirt.
No, Jack's not a Collingwood supporter, although his taste in shirts shortfall in judgment and taste.
He tries to tell us it's because he supports Newcastle in the English Premier League, but we're not that gullible, Jack!

At left: At least they're the Moonee Valley colors. Modelling the latest in fashion shirts are L-R Matt Thomas, Jack Newman, Ben Thomas and Channa DeSilva.